Amscot Love is in the Air, Vegas, has got her Showing career off to a flying start.

After going Best Puppy in Show at the British Gordon Setter Championship show on the 21st October, 2 weeks later she went one better and performed spectacularly at The Sub-Breed Champ show Setter and Pointer on the 4th November at Stafford Show Ground. She won a strong Puppy Bitch class, followed by winning Best Puppy in Breed. Vegas even won the trophy for best Gordon exhibit under 18 months old at only 9 months old!

She then went up in a strong line up of puppies to go top and win Best Puppy in Show under well known Gundog judge John Thirlwell. 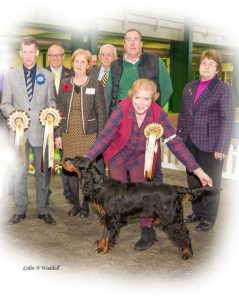