First and foremost I believe in breeding Gordon Setters who can still do the job they were originally bred to do and look beautiful doing it. Because they are smart and have excellent temperaments, they are very trainable and make wonderful companions in the right home with the right training and exercise.

Amscot Gordons is a rare example of a true dual-purpose kennel in the Gundog world, meaning our Gordons are capable of working on a grouse moor or on partridge / pheasant at the highest level, winning at Championship level in a show ring, and most importantly, making excellent pets as part of a family.

I bought my first Gordon in 1983 and now have my 14th generation direct line descendants to that original Gordon.
I have bred, owned and campaigned the first Dual Champion Setter in UK history. Amscot Irresista Belle, ‘Trisca’, has been featured in many books, magazines, dog papers, etc. including the Kennel Gazette and the front page of Dog World and her picture has been on display in the Kennel Club.
I have bred and owned UK Champions, a Field Trial Champion, and bred French, American, Icelandic, and International Champions. I judge shows in the UK and internationally, as well as at field trials where I am a B panel KC judge. I have been honoured to judge in Australia, Holland, Italy, Germany and France at Championship level, and was very honoured to judge Gordons at the World Dog Show held in Paris in 2011. I have also judged at Match Level in the United States.

I have exported Gordons all over the world and also exported semen to responsible breeders in other countries. All owners abroad must meet me personally and, like UK owners, satisfy my high standards to own an Amscot puppy.

Gordon Setters unfortunately can suffer from a hereditary condition called Hip Dysplasia. I screen all my puppies, including as many pet owned as possible, for Hip Dysplasia. I have won the UK Gordon Setter Association award for best hip-scored litter in the country 3 times and have won again for 2014. Other winners usually have Amscot bloodlines. My HD scores are now regularly in single figures, of which I am very proud.

Late onset blindness, PRA, has now been identified in the breed and a test is now available via DNA. All breeding stock are tested and currently are CLEAR of the gene responsible, so can never produce a puppy with PRA.

I personally stay in touch with every owner throughout the dog’s life and am available at all times for advice or assistance. Many owners have come back to replace their beloved Gordon when it passes on. That is the highest recommendation I could have.

Our home grown Vegas, Amscot Love is in the Air has become UK show champion, German and International champion. 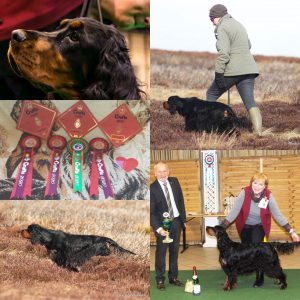